Insidious (2011)Movies
Uncanny Tranny Valley
Overall Rating
Boycott SuggestionPay To Consume
It's old enough to be cheesy in a fun way but new enough to actually scare you. It starts out cliché and many things make you want to scream at the characters for how they act. But the Sci-Fi/fantasy/action elements make up for it in the second half. There's a lot of potential with the series and the amount of sequels proves that. So, in many reviews I will jokingly give bonus points for unintentionally transphobic scenes. Like in "Smile" there is a creepy masculine looking demon lady that scares the hell out of you because of how hideous she is. Hideous because of how manly she looks.
Well, for some reason I've been watching a lot of horror lately and this theme comes up again and again. In the first "Insidious" there is a demonic force that has long nails and blasts a Tiny Tim "Living In The Sunshine" record, somehow making that f*ggy Spongebob tune ominous. In the second one, there are even more transphobic themes, (very explicitly so), but more on that later. Clearly, the creators of these films aren't secret Republicans with hidden based messaging. I suspect they are merely trying to make spooky stuff the same way Alfred Hitchcock did with "Psycho."
Which begs the question: why are trannies scary? The first and most obvious answer is that many of them are mentally ill. And mentally ill people are a central pillar of the horror genre. But I think it's also their ambiguity. VSauce explains in more detail:
Why Are Things Creepy? - VSauce https://www.youtube.com/watch?v=PEikGKDVsCc

And I thought I was clever, wanting to coin the term "Uncanny Tranny" or "Uncanny Tranny Valley" but after some googling it seems many people have already noticed this & agree:
https://kvisser.medium.com/the-uncanny-tranny-valley-bdc68eb3f1c5 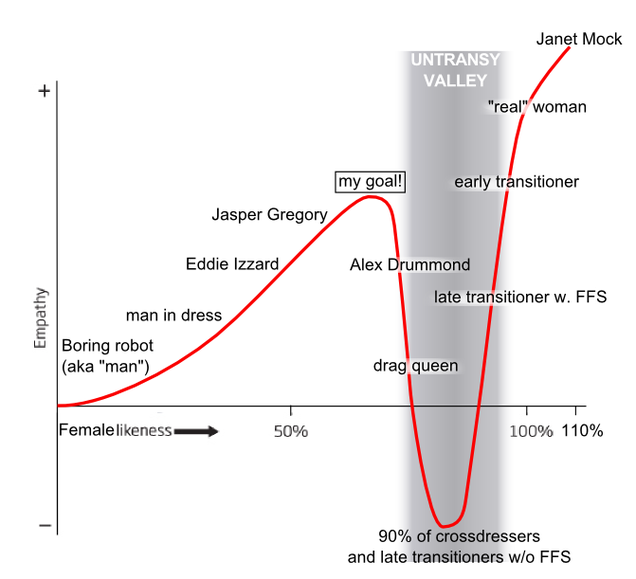 Anyways, the first "Insidious" barely has any tranny elements. It just got my noggin joggin. It's not that great of a film but I really like the premise. And the second half gets fun. Watch it if you like horror and paranormal topics. Don't get your hopes up though. Pretty average overall.